THE PRE-EUROPEAN VEGETATION OF TOOWOOMBA -- Submitted by John Swarbrick

Posted by Toowoomba Field Naturalists at 5:52 PM No comments: Links to this post

This is a unique and to my mind wonderful park that I suspect has not been visited much or at all by most of our members. The entrance is in Hursley Road directly opposite the main entrance to the horse racecourse. Everything in this park is TALL and decades old. 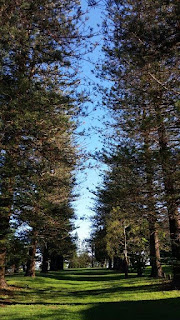 Posted by Toowoomba Field Naturalists at 5:50 PM No comments: Links to this post

In early April I became aware of a nearby clamouring to be fed. Upon investigating (any excuse to stop work) I found a female Superb Fairy-wren feeding a fledged chick that was two to three times her size. Jean took a photo and we concluded that it was a Horsefields Bronze Cuckoo chick – one of our more commonly observed cuckoos here. A bit of emerging bottle green on the back and a light hachuring of bars across the front were its distinguishing traits. It revisited next day to the same tree and vine tangle, with multiple wren attendants.
There was a moment when the male wren appeared, looking disturbed and apparently about to start legal proceedings related to paternity testing.
Our dam is a shallow puddle again, having breached in the heavy rain of mid-February. It is full of tadpoles etc. and attracting birdlife. There is a pair of White-faced Herons and there has been a brief visit by a Great Egret (a rare sighting for us here). I watched as a heron did its special dance of right foot, scratch-scratch-scratch, left foot, scratch-scratch-scratch – probing for any subsequent movement, (all to hokey-pokey rhythms that I could almost hear). Suddenly it became aware of me and promptly vacated.
A pair of Plumed Whistling Ducks was occasionally sighted near the dam since early March, being very secre-tive. In early April, one adult started noisily carrying on, near the house, in the early afternoon, with occasional muted responses from the dam/gully area. Next day, by coincidence, I encountered the two Plumed Whistling Ducks and five very small ducklings on our smaller but permanent dam on the east side of our property. They had abandoned their puddle for a better piece of real estate. What amazed me was the 700 meters of dense pasture they had to negotiate en route.
We also had a rare (for us) sighting of a pair of King Parrots drinking at the dam. Our resident Pheasant Cou-cals have been most vocal recently and have adopted the top of a maturing Silky Oak as their trysting perch. (As Uncle Remus said, “Everybody got to have a singin’ tree!”)
In recent years we’ve had occasional brief visits by Eastern Whipbirds. This year a pair arrived in our gully and scrub patch in January and have been around (not all the time) until almost the end of March. We’ve been so privileged to have those iconic bush calls to start our days at dawn.
The Collared Sparrowhawk has been working the house environs where we have several bird baths, looking for any opportunities, even visiting the insect screens.
Double-barred Finches, Speckled Warblers and White-browed Scrubwrens have all recently been seen busy with nesting materials. So the rush is on, after a tough summer, to produce a next generation before winter sets in. Grass seeds and insects are in abundance following those February rains. Good luck to them!

Posted by Toowoomba Field Naturalists at 4:41 PM No comments: Links to this post

Posted by Toowoomba Field Naturalists at 4:30 PM No comments: Links to this post

Birds seen in a garden in Pechey area - by Tricia Allen

In the absence of an outing on 05 April, I decided to have an outing in our garden with our daughter Carolyn. This turned into two separate one-hour sessions. These are the birds seen and heard in order of their appearance.
Grey Butcherbird, Eastern Whipbird, Eastern Spinebill, Currawong, Magpie, Brown Honeyeater, Lewins Honeyeater, Yellow-faced Honeyeater, Kookaburra, Brown Cuckoo Dove, Striated Pardalote, Red-browed Finch, Brown Thornbill, Noisy Friarbird, Red-backed Fairywren, Superb Blue Wren, Eastern Yellow Robin, Scarlet Honeyeater, Pale-headed Rosella, Pied Butcherbird, Fan-tailed Cuckoo, Yellow-tailed Black Cockatoo.
Carolyn's photo is of a scarlet honeyeater, which has run out of the red callistemon it usually frequents but seems perfectly happy in the salvias at our front door. 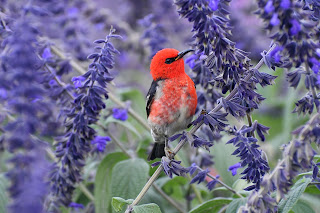 Posted by Toowoomba Field Naturalists at 3:47 PM No comments: Links to this post

Lamprolina, a genus of Leaf Beetles in the Chrysomelidae family - by Glenda Walter

Although this insect season had a late start, I’ve been able to find quite a few leaf beetles on my walks around local parks. Some of these are brightly coloured to warn predators that they are inedible, but others with dull colours rely on not being noticed.
The common name of the Lamprolina genus is “Pittosporum beetles”, most feeding on plants belonging to the Pittosporaceae family including Pittosporum and Bursaria. At first glance many beetles in the Lamprolina genus look the same, but they can be differentiated by the black patterns on the pronotum and head. As I have only been able to identify L. impressicollis, I can’t say for certain that the spot and patch patterns are identifiers for separate species or if there are just local variations on one or more species. The fact that they are found on different food plants may indicate that those in the images below belong to at least several species. Experts on iNaturalist website including Martin Lagerwey, an acknowledged Leaf Beetle expert, are unable to help.
Members of the Lamprolina genus are said to be found in the East and North of Australia. As in many insect families, the taxonomy is in need of revision.
The colour of the elytra (wing covers) varies between dark blue, dark purple and very dark green, and head/ pronotum are shades of crimson to orange and yellow. The pronotum was differently shaped in some, and the beetles also varied in size.
Here is a list of those I have found in South East Queensland:
·         Lamprolina impressicollis, with no spot or patch markings, was seen at Bellthorpe and at Stanthorpe.
·         Species A – black patches on front of pronotum and back of head - Hartmann Reserve, Rogers Reserve and Withcott.
·         Species B – two black spots on pronotum and large patch on head - Federation Park.
·         Species C – large black patch on noticeably bright crimson pronotum, and none on head - Peacehaven.
·         Species D – black patch at rear of head - Crows Nest National Park.
·         Species E – blue elytra and yellow pronotum with grey marks - Lake Broadwater.
·         The larva of an unknown Lamprolina species- Rogers Reserve.
Chris Reid in his paper A taxonomic revision of the Australian Chrysomelinae, with a key to the genera (Coleoptera: Chrysomelidae), published in 2006, says that there are 14 described species in the Lamprolina genus. (This number may have changed since 2006, and there may be undescribed species as well.)


Posted by Toowoomba Field Naturalists at 3:38 PM No comments: Links to this post

At 7.30am sharp, nineteen Field Nats, including our driver Phil Haxen, departed by bus from the Neil Street car park bound for Ambrose Treacy College, Indooroopilly. On arrival we met up with Lesley Beaton and John Ball, who had travelled independently. The focus of our visit was Brother’s Gully.
An article by Alexander Davies entitled Brother’s Gully: A story of habitat regeneration increasing biodiver-sity, in the June 2019 edition of “Metamorphosis” the Magazine of the Butterfly and Other Invertebrates Club (BOIC) had alerted Ben Gundry to the potential of the Gully for a visit. To quote from the article: “Brothers Gully is a patch of sub-tropical riparian rainforest adjoining mangroves, located at the south western end of Ambrose Treacy College, Twigg Street, Indooroopilly, Brisbane. The Gully area starts at the top of Kate Street, Indooroopilly, and stretches 140 metres till it reaches the riverbank”.
The Gully is the subject of a weeding and revegetation program, initiated in 2015 by a Year 11 student, Alex-ander Davies, with support from the school and his grandparents, Trevor and Tina Lambkin. Alexander, our guide for the morning, had been motivated by the sight of this small remnant area of riparian rainforest becoming choked by exotic weeds. He told us that revegetation of the steep Gully is also supported by the Brisbane City Council under its Land for Wildlife program, and free plants from the Moggill Creek Catchment Group (MCCG) and Save our Waterways Now (SOWN) nurseries. But the weeding and planting is all done by students (Gully Men) under the direction of Alexander.
We were impressed by Alexander’s knowledge of both the flora and fauna as he guided us around different sections of the Gully, some relatively advanced and others still being cleared in readiness for planting. Over 180 (mainly local native) species of ground cover, understorey, mid-storey, and canopy plants have been grown to enhance the existing vegetation. An increasing number of birds, mammals, reptiles, and invertebrates have been recorded since commencement of the project – a reflection of the plant species selected.

After a leisurely lunch on a wide deck overlooking the river, we departed for the Sherwood Arboretum, to be joined by Tricia Allen and her grandson. On arrival we were met by Brisbane City Council volunteer Guides, Dick and Jankees. Opened on 21 March 1925, the heritage-listed Sherwood Arboretum covers an area of 15 hectares, contains approximately 1,100 trees from about 300 species, and comprises parkland, artificial fresh-water wetland and has an extensive frontage to the Brisbane River. Of particular note is an avenue of Queens-land Kauri Pines (Agathis robusta) planted for the 1925 opening.
Splitting into two groups, we followed our knowledgeable guides as they identified fine specimens of native trees, some local and others from further west that were familiar to many of us. A boardwalk along the Bris-bane River introduced us to three species of Mangrove. A very comprehensive description of the Arboretum is available on Wikipedia and interested readers are encouraged to access it for further information.
Leaving at 4.00pm Phil drove us safely back to Toowoomba, where we arrived at 5.30pm after an enjoyable day blessed with perfect weather 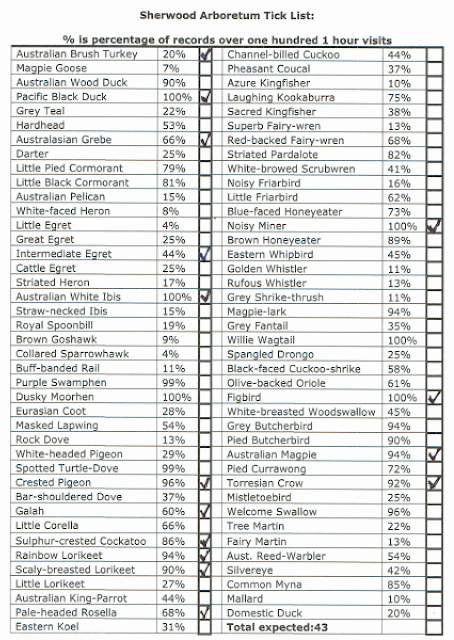 Posted by Toowoomba Field Naturalists at 12:06 PM No comments: Links to this post

A site dedicated to the activities of the Toowoomba Field Naturalists Club Inc, established since 1951.

The Toowoomba Field Nats have been meeting and enjoying outings for over sixty years.

Our outings are held on the Sunday following the meeting which is the first Friday of the month. We have at least ten outings a year ranging from half day trips to 4-day camps. They are usually on the Darling Downs but we do venture further afield.

Learn about natural history at our meetings with talks presented by specialists, both professional and amateur, and from our members’ show-&-tell. Our interests are wide and varied, and are reflected in the guest speakers’ topics which can range from Glossy Black Cockatoos to Hobbits in Indonesia!

(If the link does not work for you, please copy the address and paste into your email program.)